The tree in the garden

From the depths I cry

Can Satan drive out Satan? 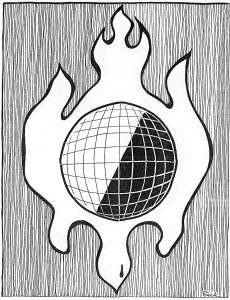 Today we return to the Sundays of Ordinary Time. We pick up Mark’s account in chapter three. The passage begins and ends with reference to the family of Jesus. At the beginning they come to take him home, saying “He is out of his mind.” Apparently his activity is bringing embarrassment upon the family. They certainly will have noticed that the authorities are agreed in opposing him. With that, scribes appear in the town, having heard about Jesus and come up from Jerusalem. Later Jesus will return the favor, as the gospel ends with him taking his case and his mission to the city.

But now they are in Capernaum, on the north shore of the lake of Galilee, where Jesus is making his unofficial headquarters in Galilee. And the scribes are busy explaining Jesus’ behavior, in support of their own animus against him. They say he is possessed by an “unclean spirit.” And with that, the conflict that has been building in the previous two chapters comes out in the open.

The language of “holy” and “unclean” is borrowed from the Jewish ritual, which sharply distinguishes those qualities, as in most of the book of Leviticus. Mark uses it to describe the two sides of the conflict in the gospel. You will recall that in the beginning, the Holy Spirit is associated with the baptism of Jesus (Mark 1:8). The Spirit comes upon him at the baptism (1:10), and drives him into the desert for 40 days (1:12), where he contends with Satan.

In contrast, his first public action in the Capernaum synagogue is to expel a demon from someone who is there. But Mark doesn’t call it a demon; he calls it an “unclean spirit”—three times (1:23, 26, 27)!

Mark will continue to use this term to describe the demonic opposition, even though he also uses the word “demon,” as in today’s gospel reading. But he is using this language to establish the sharp differences between the two sides, in his view. It is the Holy Spirit versus the unclean spirits, with Jesus on the good side and his opponents on the other. And don’t forget that this carpenter from a village in Galilee has the entire religious establishment of the time against him, and so Mark wants to make sure that we understand whose side God is on.

With that background, we can understand Jesus’ response to the charges against him. The scribes claim “He is possessed by Beelzebul,” and, “By the prince of demons he drives out demons.” Jesus first answer is to point out that his practice of expelling demons indicates he is not on their side. “If Satan has risen up against himself and is divided, he cannot stand; that is the end of him.”

And with that we can understand his second line of argument. “Whoever blasphemes against the Holy Spirit will never have forgiveness, but is guilty of an everlasting sin.” Jesus is with the Holy Spirit, those against him are not. The sin against the Holy Spirit is to oppose Jesus and his work. When finally he does turn toward Jerusalem, to challenge them there, their opposition intensifies and he will be killed. However, Easter morning proclaims God’s support and endorsement of Jesus and his message. He lives.

Today’s gospel passage returns its attention to the family of Jesus. For the moment his natural family offers a comparison with the spiritual family of those who “do God’s will.” Later (Mark 6:1-6), he will finally return home, as they wish, but he will not find a welcome there. We have moved from “come home,” to “don’t come home.” At that time he will travel to the surrounding villages with the good news.

For reflection: Why do the scribes oppose Jesus?

Many gifts but the same spirit

The struggle to love our neighbor