Cleansing of Naaman the Syrian

The Lord has done wondrous deeds

I suffer as my part of the gospel 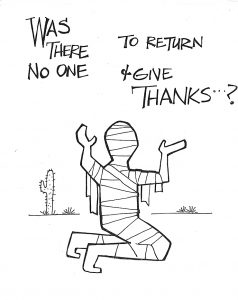 The liturgy gives us only a snippet of the Naaman story. To make sense of it we need to supply the backstory. Naaman was a commander in the Syrian army, which had hostile relations with the kingdom of Israel, always at war or on the verge of it. Therefore, that Naaman would appeal to Israel for his cure was extraordinary.

What happened was that one of his wife’s maids was a war prize, an Israelite girl. And she told her mistress that there was a prophet back in her homeland that could deal with Naaman’s problem. That started it. But it was against all probability that it would happen.

Nevertheless, Naaman appealed to the king of Israel with a letter. It was understandably was rejected, with the suspicion that Naaman was trying to cause an incident by making an impossible request. But the prophet Elisha, on hearing of the matter, sent a note to the king saying that there was a God in Israel, and he would be happy to take care of the leprosy.

That would have been the end of the matter if Elisha had only been more diplomatic. The cure would take effect, and the story would be over. But it didn’t work out that easily. Elisha didn’t bother to meet with the Syrian, but simply sent word to Naaman that if he would wash in the water of the Jordan River, he would be healed of his leprosy.

Miffed, Naaman almost refused to exes that he was persuaded by his servant Gehazi to give it try. Which he did. And he was cured of his leprosy.

The leprosy cure, however, is only a part of the story. Both here and in the gospel account of the ten lepers a further complicating element is the attention given to a foreigner. This aspect of both stories engages the prejudices of the communities involved. The gospel story emphasizes the contrast between the nine lepers, who like Jesus were Jews from Galilee, and the single Samaritan leper who returned to express his gratitude. The punchline is Jesus remark, “Ten were cleansed, were they not? Where are the other nine? Has none but this foreigner returned to give thanks to God?”

With that phrase, “this foreigner,” Jesus is imitating their attitude more than his own. He is using the language they would use. His words to the leper show his compassion toward the man.

The liturgy connects these two stories of Elisha and the lepers. But it is worth mentioning that Luke has already implied the connection. At the very beginning of the public life of Jesus, he mentions the prophet in a telling context. In Luke 4:16-30, Jesus opens his public ministry with a reading in the synagogue of Nazareth. When he receives some pushback from the townsfolk, he mentions the Elisha. “There were many lepers in Israel during the time of Elisha the prophet; yet not one of them was cleansed, but only Naaman the Syrian” (Luke 4:27).

The implication is that Jesus has adopted the role of the prophet. In Luke’s gospel, not only will he take his healing ministry beyond his hometown of Nazareth, but even out to the wider world itself. This will happen through the community of his followers, as Luke tells in his follow-up work, the Acts of the Apostles.

Much is going on here. But at least part of the lesson is that no one stands outside the circle of God’s love. Luke is writing his gospel for a Gentile audience. His two books chart a mission to the Gentile world, fulfilling the promise of “a light to the Gentiles” (Isa 48:6; Luke 2:32; Acts 13:47).

For reflection: We are included among Luke’s Gentile readers.

The only path forward

Caring for and learning from our elders