Moses and the burning bush

He has made known his ways to Moses

All were baptized into Moses

Galileans, a tower, a fig tree 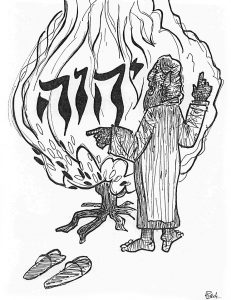 The readings seem to be scattered in many places today, but a fresh look shows some themes and motifs running through them. Moses, given a starring role in the first reading, reappears in the psalm and the letter to the Corinthians. In addition, the burning bush that is the occasion for his call finds a parallel image in the fig tree of the Gospel reading. Even the unexpected appearance of the Galileans slaughtered by Pilate and those who were killed by a falling tower in Siloam may find an echo in the Egyptians against whom Moses was sent.

Luke’s account of Pilate’s cruel treatment of the Galileans is not mentioned elsewhere, but historians do record many instances in which the Roman occupation dealt harshly with the people of Galilee and Judea. So this would not be untypical. The second example turns from the experience of sanctioned terrorism to that of a construction accident. We can wonder about the conditions that brought about the incident. But Jesus turns the question away from our tendency to presume God’s  anger. He doesn’t answer the question why bad things happen to good people, but instead invites them to consider their own lives, and the need to repent.

The fig tree story highlights the role of the gardener. The owner, looking to past failures, wants the tree removed. The gardener, looking to future possibilities, suggests giving it another year. The lesson is clear to Jesus’ listeners. You have an opportunity in the gift of the present moment; use it to ensure a favorable future. For us, it is a reminder that we are in Lent, with the possibilities it offers us for repentance.

In today’s excerpt from Paul’s first letter to the Corinthians, he uses the image of the “type” and the “antitype” to understand the relationship of the Old Testament stories to his times, and (for us) the New Testament. The story of Moses is a “type,” here translated as “example.” The Gospel story of Jesus is the “antitype,” or further fulfillment of the image. Much like allegory, Paul uses the precedent of Moses in the Exodus to argue the need for the Corinthians to put aside their disagreements (the reason for his letter) and follow Christ into the promised land, like the Israelites did with Moses.

Moses is centerpiece of the readings. The incident of the burning bush is the occasion of his call to return to Egypt and lead his people out of slavery. A number of themes come together in this story. Moses is currently in Midian, leading the life of a shepherd. We are reminded that ancient kings and leaders were compared to shepherds, and Moses, like David, is presented as having that experience.

The bush is on Mount Horeb, also known in other passages as Mount Sinai. This is the place to which he will lead the liberated people for the covenant between them and God Yahweh. At that time, God officially adopts his role as their king and leader, though others, like Moses, will be God’s active representatives in that role.

God identifies himself as the God of their ancestors, the patriarchs. The story makes clear that this is a continuation of the promises of old. It is the same God. However, he introduces himself under a new name — Yahweh. “I am who I am” was a popular way of translating this mysterious name.

Moses’ call is specific. He is to be God’s agent in releasing the captive Israelites. God has heard their call and selected Moses to free them. After some reluctance, Moses accepts his commission, and the Old Testament drama begins.

For reflection: Moses and trees, this week’s emblems for Lent.

Crime, punishment and Catholic teaching on the death penalty