A shoot from the stump of Jesse

Justice shall flower in his days

Scriptures written for our instruction

John the Baptist comes with an “axe” 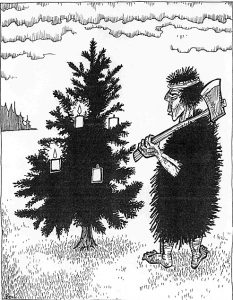 As we begin Cycle A, it is worth noting that this year favors the classic biblical books that appeared most often in the old one-year lectionary—Isaiah, Romans and Matthew. As we work our way through the cycle we will encounter many other biblical books, but we will also gain an appreciation of these three.

The reading from Isaiah has given us the Advent tradition of the Jesse tree. The piece is framed, at the beginning and at the end, by two similar statements about the stump from the tree of Jesse (11:1, 10). Jesse of course was David’s father. He had a farm at Bethlehem, an ancient Israelite town. It would the first to become identified as David’s city. Later, that designation would apply to Jerusalem, after David cap­tured the city from the Jebusites and made it his capital. The “stump” suggests that this passage is written later, after the tree is felled, when the royal family has passed into history. But the promise of a new “Anointed One,” a new “Messiah,” is now entered in the books.

Between the two thematic statements we have three sections. The first (11:2-3a) lists the spiritual attributes of the leader. We have come to know them as the ­seven gifts of the Holy Spirit, though we had to add one—piety—to bring it up to the required number. The second part (3b-5) identifies the customary practices of the leader—these concern judgment, justice, attending to the poor and correction of the wicked. The third part is famous as the Peaceable Kingdom, made famous by the American primitive artist, Edward Hicks. The lion lays down with the lamb—an ­image of the peace that will flow from the just administration of the true leader-­king. This is peace in the fuller sense of Shalom, not in the negative sense as cessation from war.

In the passage from Romans, Paul offers instruction for discipleship. In other letters, Paul uses the last part of the letter to address problems that have developed in churches that he has founded. The Roman church is not one of these, and so his final section promotes general affirmations. Today he encourages attention to the Scriptures. Of course, for Paul this would mean what we call the Old Testament. The New Testament hasn’t been written yet, though this would be part of it. He also enlarges his claim to be the Apostle to the Gentiles.

The Gospel reading from Matthew features John the Baptist. The common pattern in the Sundays of Advent is to feature John in the second and third Sundays. So it is here. However, the two Sundays are linked even more closely this year. This week we begin a theme that leads into next week.

John is a man of the desert. His imagination is filled with turning forests into deserts. Defoliation. “Even now the ax lies at the root of the trees.” The theme is “decision,” as in de-cision: “cutting away.” Leave behind, or “cut away,” the unfruitful past, and begin again.

He is insisting that this is the time. The time is now. “Repent, for the kingdom of heaven is at hand!” At the first, Jesus will repeat exactly what John is saying (3:2; 4:17)—for now. But in the future he will modify John’s urgent message. But that is next week.

For reflection: How is a decision a “cutting away”?

Note: As in past years, a book of my homilies given at the Franciscan motherhouse is available to interested persons—Cycle A of three years ago. $13.00 covers most of the cost of reproduction, with an additional $3.00 for postage. Also available for pick-up at Smyth Hall at Loras College. Contact Carol Oberfoell, 563-588-7662, or Carol.Oberfoell@loras.edu.