A covenant written on the heart

Create a clean heart in me

Jesus in the garden 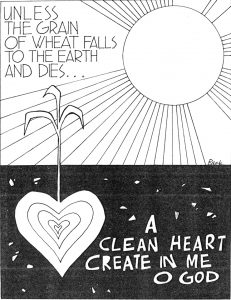 The Sunday Lenten series of arks and covenants comes to a conclusion with today’s message from Jeremiah on a “new covenant written on the heart.” The image of a “clean heart” follows in the psalm response, to suggest a symbol for the day.

While the “new covenant” is frequently thought about in terms of the New Testament in contrast to the Old Testament, this is not what Jeremiah had in mind. Although there is warrant for this reading in the letter to the Hebrews (for instance, 8:8-13), this oppositional reading has produced some of the more shameful anti-Jewish interpretations through Christian history. For that reason, it seems wise to look more closely at what Jeremiah intended.

According to the Old Testament scholar Walter Brueggemann, the passage refers to the renewal of Israel, which has experienced the devastating loss of its kingdom, its capital city and its temple of Yahweh. In Jeremiah’s view, this is due to failure to attend to the promises made in the covenant agreement with God.

Brueggemann (Jeremiah, 293): “The contrast between old and new covenant is in its mode of reception. The old covenant for Sinai was resisted until it was frozen and abrogated. The new covenant will not be resisted, because the torah—the same commandments as at Sinai—will be written on their hearts. That is, the commandment will not be an external rule which invites hostility, but now will be an embraced, internal identity-giving mark, so that obeying will be as normal and as readily accepted as breathing and eating.”

Another way of putting this is to say that the “clean heart” is not so much about being pure as the driven snow as it is about being responsive to God’s call in our lives. While the first can tempt to pride, the second is attentive to that still needed to be done.

That attentiveness to God’s demands is sometimes called obedience. And as such that theme sets the terms for the other readings in today’s liturgy. The passage from Hebrews speaks indirectly of Jesus’ temptation in Gethsemane, in the Passion account. We are at that point in Lent when we are beginning to turn our attention in that direction. It will serve as the Gospel reading next week. Jesus’ obedience is a supreme moment of that attentiveness to God’s demands.

The Gospel for today, concerning the grain of wheat, falling to the ground and dying, is John’s version of that final temptation of Jesus. John does not tell the garden story (check out Chapter 18 of his Gospel). However, we do have this passage that concludes the “book of signs,” the public ministry of Jesus in this Gospel.

Jesus is “troubled.” This is the third time John says this. The other two times (11:33, 38) concern the death of Lazarus, which also anticipates that of Jesus himself. He knows that his return to Jerusalem means the exchange of his life for that of Lazarus.

As in the other accounts of the temptation in Gethsemane, this is the moment that Jesus says “Yes” to the request made of him. “Yet what should I say? ‘Father, save me from this hour’? But it was for this purpose that I came to this hour.” As John frames the matter, this is not so much a sacrifice in the cultic manner as it is a supreme personal sacrifice for the sake of others: “No one has greater love than this, to lay down one’s life for one’s friends” (15:13)—first Lazarus, now the others.

For reflection: Does the image of the wheat grain speak to you? Why?