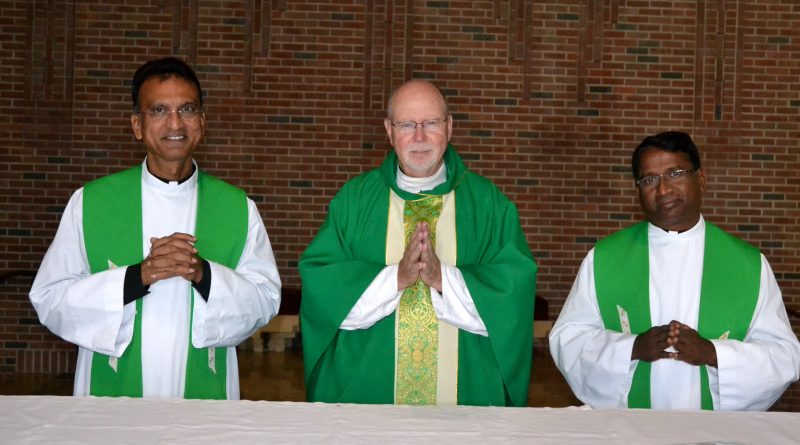 Indian priests have deep ties to the archdiocese

Fathers Francis Bashyam and Nathan Lazar, priests from India with deep ties to the Archdiocese of Dubuque, were in Iowa as millions around the world watched the canonization Mass for St. Teresa of Kolkata Sept. 4.

A few days before the events in Rome, the two clergymen reflected on how  the famous nun, known as the “saint of the gutters,” has affected their country and the world.

“Being Catholic, we are a microscopic minority (in India) so we might not have a say socially and politically in public life,” added Father Bashyam.

He emphasized, however, that the efforts by Catholics and other Christians to start schools, hospitals, orphanages and other charitable organizations, like those founded by Mother Teresa’s order, the Missionaries of Charity, have had a giant impact on Indian society. The Christian influence, explained Father Bashyam, is felt well beyond the small community there.

Fathers Bashyam and Lazar both serve in the Diocese of Bellary, which contains about 40,000 Catholics. It is located about a thousand miles away from the city of Kolkata, in the south central part of India. Father Bashyam’s connection to the Church of the Nativity Parish in Dubuque began in the 1980s when Father Mark Ressler, a priest for the Archdiocese of Dubuque, sponsored his seminary education. Father Ressler traveled to India in 1986 to attend Father Bashyam’s ordination. Since then, Father Bashyam, now an administrator at Vianney Catholic High School in Bellary, has been on dozens of trips to Dubuque and other parts of the archdiocese. He and Father Lazar spoke to The Witness after celebrating Mass at Nativity Church with current pastor Father James Miller. Father Lazar has been to the United States on eight separate trips. Fathers Bashyam and Lazar have forged strong bonds with priests, sisters and lay people in the archdiocese.

“It’s been 20 years since I’ve been coming and going,” said Father Bashyam. “It’s a question of meeting our friends. It’s a social and religious visit.”

In 1997, Father Bashyam served as associate pastor for Nativity Parish for a year. As a going away present, parishioner Jim Giese gave the priest a portrait of Mother Teresa done by a local artist.

“I was here when Mother Teresa died,” remembered Father Bashyam. “I still have (the portrait). That was their parting gift.”

Father Bashyam has another unique connection to Mother Teresa’s legacy. Born in Macedonia in 1910, the saint joined the Loreto order of nuns in 1928. In 1946, while travelling by train from Kolkata to Darjeeling, she was inspired to found the Missionaries of Charity order, which is dedicated to serving the poor and unloved.

The order has expanded across India and the world. In the diocese of Bellary, a Missionaries of Charity convent is located just behind the school where Father Bashyam works. Mother Teresa visited this convent in 1973 and 1975.

Today, six nuns staff a home there for children who have been abandoned, children with disabilities, and elderly men and women with nowhere else to turn.

“Most of them are bed ridden,” Father Lazar said of the children with disabilities.

The children who are healthy enough, attended school, including the high school where Father Bashyam serves.

“I spend a full day in school with 1,500 students,” said Father Bashyam. “Most of them are poor children. We have 40 children from a leprosy colony.”

The nuns at the convent also visit nearby smaller villages on a regular basis, providing food and medical care.

Father Lazar is engaged in a different sort of ministry than Father Bashyam, but is also dedicated to helping the poor and others in need. He is assigned to Holy Cross Church in the city of Sirwar. He is pastor to 27 Catholic families in that city. He also cares for eight substations of the church, which are in smaller villages and contain about 10-15 Catholic families. The church also supports a school that goes until sixth grade.

The schools and other ministries operated by the Diocese of Bellary are open to people of all religions, according to the priests. With the Catholic population being very small, a lot of the financial support comes from Hindus and Muslims that support the efforts.

With regular collections, the parishioners at Nativity in Dubuque also support ministries in the Diocese of Bellary. Over the years, the parish has contributed to the construction of numerous schools, churches and other projects. Father Bash­yam’s school is currently in the middle of construction of a new school building.

The two priests cherish their relation­ships with people in the Archdiocese of Dubuque and hospitality has been given in many ways. Several years ago, for example, Msgr. Tom Zinkula, currently the rector at St. Pius X Seminary, visited India for a month and stayed with Fathers Bashyam and Lazar.

As the two priests continue to imitate Christ to others in their part of the world, they join many in looking to Mother Teresa and other  holy people, like St. Alphonsa of Kerala, the first native Indian saint, for inspiration.

“Hindus, Muslims and Christians, they all look upon Mother Teresa as a saint,” said Father Lazar. “She is a witness to Christ.”

In the Diocese of Bellary, Catholics celebrated St. Teresa’s canonization with processions, praying of the rosary and Masses, according to the priests.

After about a month visiting the United States, Fathers Bashyam and Lazar are set to return home on Sept. 16.

“We are very grateful for being accepted in the tri-state area,” said Father Bashyam. 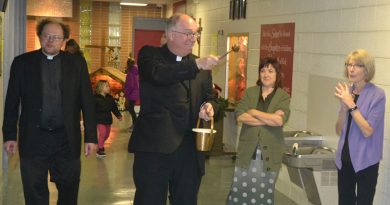 Convention draws hundreds of Knights, their families to Dubuque 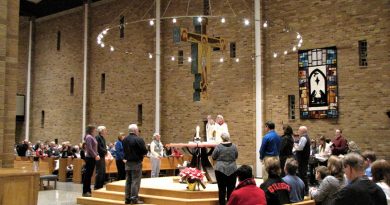