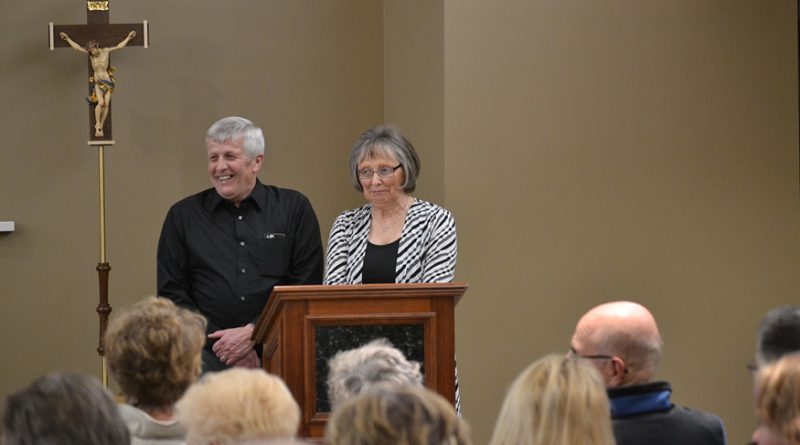 Around the Archdiocese
March 3, 2017 Jill Kruse-Domeyer

DYERSVILLE — Ken and Mary Lou Althoff both grew up in hard working, strong Catholic farm families, which they say instilled in them a faith that’s sustained them throughout their lives, even when they’ve had to face unthinkable tragedy.

The Althoffs, members of Sacred Heart Parish in Maquoketa, shared their exper­i­ences during a presentation in the new adoration chapel at Beckman Catholic High School in Dyersville on the evening of Feb. 23.

The couple spoke about the important role religion played in both of their childhoods. When she was a girl, Mary Lou said, she and her family prayed before every meal, said the rosary together every night, and went to Mass every Sunday and holy day and many times in between. Ken’s family also prayed together regularly when he was a boy, and he said he was taught at a very young age that, “missing Mass was not an option.” Both also attended Catholic schools.

The two also recounted memories of their early years on their families’ farms. Mary Lou remembers collecting eggs, feeding the livestock, cleaning out pens, even milking the cows by hand. Ken said he enjoyed planting and harvesting the crops and called farming his first real passion.

To be a farmer, Ken said, “You must have deep faith, faith that allows you to believe that what you do will produce great results. You take a seed and plant it in the ground, and you believe that with soil, nutrients and water you will have a bountiful harvest, but it may be too cold, too hot, too wet, too dry or numerous other conditions beyond your control that produces less than you had hoped for, but next year you’ll faithfully go out and do it all over again.”

After the Althoffs were married in June of 1972, Ken would continue to follow his passion and farm with his father for a number of years, while Mary Lou taught school. The couple would have three daughters: Shelley, Tara and Angie, and during those early years of their marriage would enjoy many happy times with their children, including going with them on a memorable family trip to Disney World.

But Mary Lou and Ken would also en­dure a series of devastating losses. Shortly after deciding to open their own business – a store that would be a combination restaurant, bar and gas station – the building they had purchased burned in a fire. They rebuilt but would later be forced to file for bankruptcy. They also lost several family members – including Mary Lou’s mother, both of their fathers and a nephew who was killed in a hit-and-run accident.

But most heartbreaking for the couple were the deaths of two of their children. In 1991, their 14-year-old daughter Shelley was killed in an accident after the vehicle she was riding in was struck by a drunk driver. Ken was in the car with her and also suffered multiple injuries. Just six years later, the Althoffs’ second daughter, Tara, 16 years old at the time, was killed in a separate car accident.

After experiencing a parent’s worst nightmare, not once, but twice, Mary Lou and Ken said they were able to cope with their grief by placing their trust in God, something they had learned to do when they were growing up in their devout Catholic farm families.

“I don’t think without a solid foundation we would have made it through this time,” Ken said.

The couple made Philippians 4:13 – “I can do all things through Christ who strengthens me” – their motto.

After the deaths of their daughters, Mary Lou said they were overwhelmed with the support they received from family and friends and members of the community who offered prayers and showed them kindness during those difficult days.

“It’s so absurd to think that one can experience peace during such a tragedy, yet I felt that peace so many times. I know it came from God,” Mary Lou reflected. “The unconditional love of God was evident to us in so many ways through so many people.”

During the presentation, the couple stressed the importance of acceptance, even when experiencing extraordinary loss. When tragedy strikes, they said, a person has a choice of how they react to it. They can choose to accept the situation, or they can choose to become bitter.

“When you experience a death in your life, whether it’s a broken relationship, bankruptcy, the loss of a job or having someone in your life actually die, you have a choice of how you are going to deal with it; you can succumb to the death, or with God’s help, you can rise above it,” Ken said. “You can let it destroy you, or you can die to self and rise in Christ.”

Mary Lou said that today she and her husband make an effort to be there for others in their community who might need comfort and support after having experienced some sort of loss of their own.

“We may visit, make a phone call or send a note to let them know we are thinking of them,” she said.

“Every kind word, every smile” shared with others, she said, can make a difference and can reflect the love of Christ in their lives.

The audience was touched by the Althoffs’ presentation. Many were brought to tears during the emotional talk.

Jill Hoeger, a member of St. John Parish in Delhi, grew up on a farm and still lives on one today. She learned about the Althoffs’ presentation through Facebook and was interested in attending because it would address her particular way of life. She said she was moved by what the couple had to say.

“It’s incredible the way they kept their faith through all the trials and tribulations they went through in their lives,” Hoeger reflected. “They are such great examples.”

Hoeger brought with her a good friend, Jennifer Zumbach of Coggon, who also lives on and grew up on a farm. She was touched by the presentation as well.

“They’re such an inspirational couple,” she said.

The Althoffs’ presentation was sponsored by the Spires of Faith Cluster, which includes the parishes of the Basilica of St. Francis Xavier in Dyersville, SS. Peter and Paul in Petersburg, St. Boniface in New Vienna, St. Joseph in Earlville and St. Paul in Worthington.

The cluster’s faith formation commission regularly sponsors a variety of opportunities for adults of all ages to grow in their faith, including retreats, Bible and book studies, faith sharing, Theology on Tap, Wine & Wisdom, 40 Hours presentations and Lenten adult faith sessions. 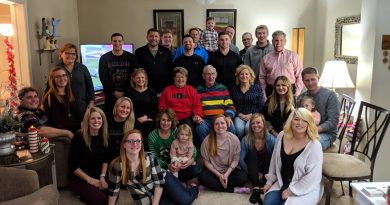 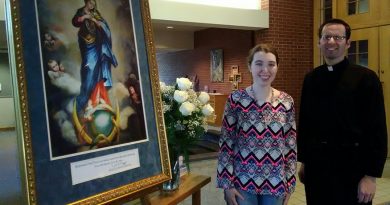 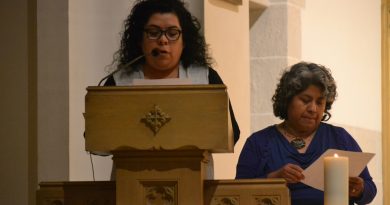